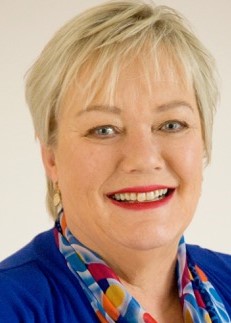 Conny is very honoured to have been nominated and elected to be the 104th District Governor in her beloved adopted country of Ireland.

She is a native of Denmark and arrived in the West Waterford region of Ireland in 1979. Where she and her husband Frank are still residing.

Together with her husband Frank, they have travelled a big part of the USA and Europe and with their Families still living abroad they like to visit them as much and as often as possible.

Conny joined Rotary in 2006, and it became very clear to her, that here was an Organisation, which was and still is, doing so much good in the world, but nobody knows about it!!

Membership and PR became the “common denominator” in everything I got involved with, she says.

And working with our young people to create an interest in Rotary, and everything Rotary has to offer them, also became something I want to continue to be working hard on.

Conny also says: “Another great aspect of Rotary for me is our Fellowship, and The Fun and support coming from being a Rotarian, is beyond anything I have ever experienced in my life “

And finally, she says “I also think that Rotary is one of the best Organisations in the World to give people Opportunities to develop their Leadership skills”

Conny is delighted that the Rotary Theme for this year is ROTARY OPENS OPPORTUNTIES, as we are fighting a global epidemic we are very much being forced to look at the Opportunities we now have to conduct a lot of our meetings on line, and become innovative in our ways of conducting our Projects, which in return opens the possibilities for joining more people together, and Together We Are Stronger.

Conny will aim to continue the positive relationship between the District and The Clubs, which has now been established during the past few years.

“A willingness to Change and Adapt, and Continuity combined with Team Work. Transparency and a better Communication will be moving us into the new era of Rotary Ireland”

Back to Previous Page